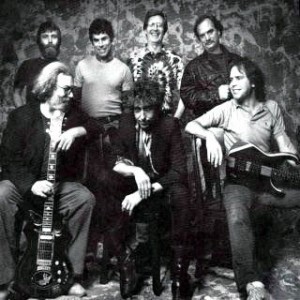 this picture is a LOT MORE INTERESTING than the actual record.

The idea of sitting through a record like Dylan & The Dead more than once is a painful one. I am not going to lie to you. The moment I started the record up a second time, I felt uncomfortable and dizzy and unable to function. By the time I hit the 9-minute “Joey” I had to turn it off, for fear of my own well-being. I’m surprised I managed to get that far.

Now, don’t get me wrong. Dylan & The Dead is not a terrible record, at least not nearly as bad as you have heard. I am sure that if you are a diehard Deadhead then it may be essential listening for you, and if you love Dylan just enough it may be worth a listen. In fact, upon first listen, I had trouble figuring out where all the hate was coming from. It’s not a particularly good live record, to be sure – Dylan doesn’t sound particularly “into” anything he’s singing, and the Dead sleepwalk their way through some okay-but-not-that-interesting arrangements – but it’s hardly unlistenable. Reports of it being “the worst record released by Dylan AND the Dead” felt a little unwarranted.

But, of course, then I tried to listen to it a second time. Man, it is a slog. It’s worse than just being terrible – it’s boring. Boring boring boring. Dull as dishwater. Why are you listening to this again again. Why put yourself through this?? These were my thoughts, at the time. I was sweating.

A track from Real Live might sneak its way into my eventual Dylan 80s playlist. But not Dylan & The Dead. I can’t even remember which songs they performed! Jeez!! I realize maybe it is not very fair for me to review a record after only listening to it one-and-a-half times, but trust me, listen to the record for yourself and you will understand.

Or don’t! Don’t. You don’t have to understand. It’s not worth it.

Here is one thing I will say in Dylan & The Dead‘s favor: there are no Dead songs. I know very little about the Grateful Dead and I do not care to know much about them. When I listen to a Bob Dylan live record, I want there to be Bob Dylan songs and Bob Dylan songs only, and this is what Dylan & The Dead provides for me (dull, overly-long jam-band versions of Dylan songs, but Dylan songs nonetheless). Compare this to, say, Before The Flood, which was pretty much half a Band live album. Jeez! Not that I hate the Band or anything, just that I would have preferred more Dylan songs. I don’t need to hear “The Weight” again. But that’s just me.

Anyway. I can’t hate this record; it is a non-entity, essentially. At least it’s not as bad as Knocked Out Loaded.

But that I will get to later! Enough preview posts! The Dylan 80s revue will begin with my next post, whenever that will be. Hopefully soon. In the meantime, feel free to slowly forget about this record’s existence so that it has been entirely removed from your mind by the time my next post rolls around. I know I will be!!

P.S.: It is worth noting that on-again-off-again Dead lyricist Robert Hunter has co-written a few songs with Dylan that are not horrible, including a few Down in the Groove tracks and the entirety of last year’s Together Through Life. So, uhh, yeah.